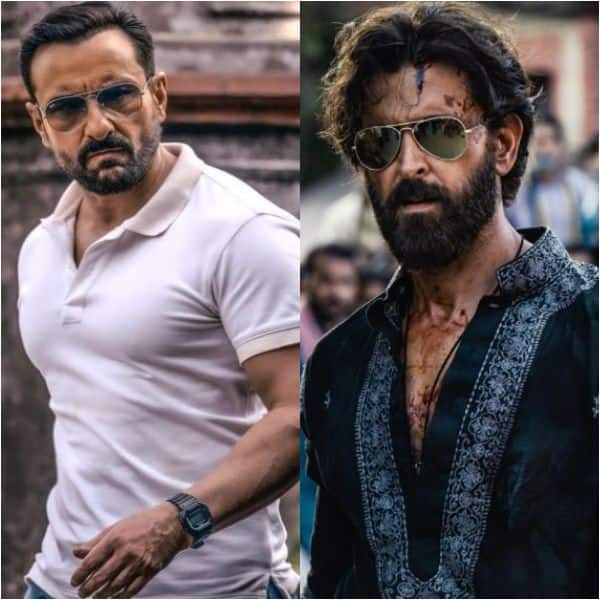 Last month, on Hrithik Roshan’s birthday, the makers of Vikram Vedha had unveiled the first look of the actor as Vedha, and today, Saif Ali Khan’s look as Vikram has been unveiled. Hrithik took to Twitter to introduce Saif as the super cop Vikram. The War actor also praised Saif and called him one of the finest actors. Hrithik and Saif have teamed after 20 years. The two had worked together in the 2002 release Na Tum Jaano Na Hum which also starred Esha Deol in the lead role. Also Read – Fan’s post comparing Ibrahim Ali Khan to Saif, Sara to Amrita Singh and Jeh to Kareena Kapoor Khan goes viral

While sharing Saif’s look, Hrithik tweeted, “VIKRAM P.s : working with one of the finest actor and a colleague I have admired for years is going to be an experience I’m going to cherish. Can’t wait! #VikramVedha #SaifAliKhan #VikramFirstLook.” Also Read – Hrithik Roshan-Saba Azad, Priyanka Chopra-Nick Jonas, Katrina Kaif-Vicky Kaushal and more B-Town couples who found love in unexpected places

P.s : working with one of the finest actor and a colleague I have admired for years is going to be an experience I’m going to cherish. Can’t wait!#VikramVedha #SaifAliKhan #VikramFirstLook pic.twitter.com/v6qDbXypNK

Fans of both the actors are excited for Vikram Vedha. A fan replied on Hrithik’s tweet and wrote, “So excited to see you both on screen, two of the COOLEST (in terms of the nature of the roles you both did before too) actors whom I grew up watching, together? Well, hell yeah! Lessgo!” Another fan wrote, “Nice!! Can’t wait for #VikramVedha!! This is going to be Epic.” One more fan tweeted, “Best of luck.. Can’t wait to watch you both onscreen.. missing you a lot.” Also Read – Hrithik Roshan plans to get married to rumoured girlfriend Saba Azad soon? [EXCLUSIVE]

Vikram Vedha is a remake of the Tamil film of the same name which was released in 2017. The original movie starred R Madhavan as Vikram and Vijay Sethupathi as Vedha. The Tamil movie featured Shraddha Srinath as the female lead, and in the Hindi remake, Radhika Apte has been roped in.

Pushkar–Gayathri, who had helmed the Tamil film, are directing the Hindi movie as well. Vikram Vedha is slated to release on 30th September 2022.