Sridevi passed away on 24th February 2018. It’s her 4th death anniversary today, and her family, friends, and fans are missing her a lot. Sridevi’s elder daughter Janhvi Kapoor penned down an emotional post on Instagram and has shared a childhood picture with her mother. Khushi Kapoor has also shared a picture with her mom on her Insta story. Sridevi passed away in Dubai due to accidental drowning. She was there to attend a family wedding, and after the marriage, she decided to stay in Dubai for a few days. Also Read – Conman Sukesh Chandrashekhar targeted young actresses like Sara Ali Khan, Bhumi Pednekar and Janhvi Kapoor by gifting high-end luxury goods – read details

BollywoodLife Awards 2022 is here and VOTING lines are NOW OPEN. Vote for Best Actress below:

Janhvi posted on Instagram, “I’ve still lived more years with you in my life than without. But I hate that another year has been added to a life without you. I hope we make you proud mumma, because that’s the only thing that keeps us going. Love you forever.” Also, check out Khushi’s post below… Also Read – Suhana Khan and Agastya Nanda visit Zoya Akhtar’s office together; fans can’t wait for their debut 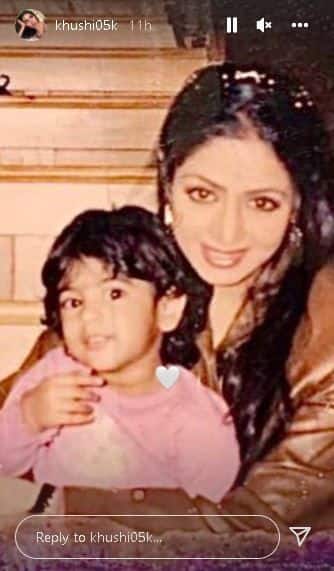 Many fans of Janhvi have commented on the post. A fan wrote, “Stay strong baby.” Another fan commented, “Your mom always PROUD OF YOU.” One more fan wrote, “You are making her proud.”

Janhvi made her Bollywood debut with Dhadak which released in July 2018, and Sridevi passed away in Feb 2018. Janhvi has proved her mettle as an actor with movies like Gunjan Saxena: The Kargil Girl and Roohi. She has an interesting line up of films like Dostana 2, Good Luck Jerry, Mili, and Mr. and Mrs. Mahi.

Meanwhile, reportedly, Khushi Kapoor is also gearing up for her acting debut. It is said that she will be seen in Zoya Akhtar’s The Archies which will be a Netflix original film. There are reports that apart from Khushi, the movie also stars Suhana Khan and Agastya Nanda. Khushi and Agastya were also spotted together a few days ago, and netizens have been speculating whether they have started prepping up for the movie.