Bollywood singer Sonu Nigam is much sought after for shows abroad. The Indian community abroad loves to listen to Bollywood music and singers are regularly called for events. But as per reports, he ran into a verbal brawl with someone who is the cousin of Mumbai BMC chief Iqbal Singh Chahal. It seems Rajinder who is the cousin of Iqbal Singh Chahal had a dirty war of words with the singer. A source close to Sonu Nigam told SpotboyeE that Sonu Nigam got correspondence from BMC chief Iqbal Singh Chahal to perform at a concert abroad via his cousin Rajinder. Over the years, an international promoter named Rocky manages Sonu Nigam’s work so he told Rajinder that all queries should be directed to him. Also Read – It’s AWKWARD! 5 pictures of Malaika Arora, Karan Johar and others that most people will relate to

Apparently, this infuriated Mr Rajinder who sent a series of slanderous messages to Sonu ji. The language used was rather derogatory and some of them even sounded threatening. It seems this left Sonu Nigam shocked as he never expected such behaviour from someone associated with Mr Iqbal Singh Chahal. Here is a screenshot of the message… Also Read – Sonu Nigam reunites with Pritam for Aamir Khan’s Laal Singh Chaddha after YJHD fallout; says, ‘I’m not a bhikaari singer’ 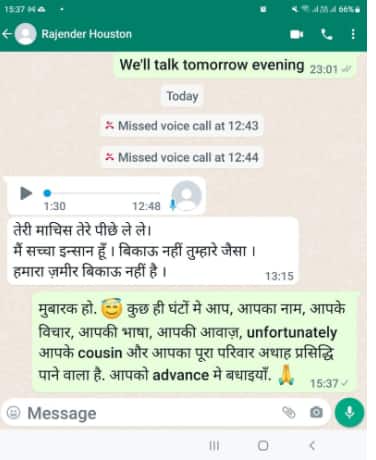 Also Read – Sonu Nigam RECALLS being reluctant to accept Padma Shri from govt; opens up on his fallout with Pritam after his Subhanallah version was dropped from YJHD

The source told SpotboyE that Sonu Nigam has the screenshot of Rajinder’s slanderous messages. It seems he is living at the residence of Mr Iqbal Singh Chahal. It seems Sonu Nigam never responded to the threat messages. The source told SpotboyE, “Sonu ji has a lot of respect and admiration for Iqbal Singh Chahal ji and his work for the city of Mumbai, especially with the way he has handled the covid crisis. It was due to this that he never took any action all this while but this time things went out of hand.” It seems it is not only Sonu Nigam who has suffered because of Mr Rajinder. He also sent similar messages to Palak Muchhal’s mother. It seems several singers have complained about how he throws his weight around taking the name of Iqbal Singh Chahal. The source concluded, “Sonu ji has decided to address the matter at the earliest so that such issues don’t crop up again.”