Samantha Ruth Prabhu has gone through a lot. The actress got separated from her husband, Naga Chaitanya in October 2021. After that, her personal life was under immense scrutiny. There were a number of nasty rumours doing the rounds. Samantha Ruth Prabhu is one of the millions who is reading the book Will by Will Smith. She took to her Instagram stories to share his quote on divorce, death, humiliation and fear. It goes like, “Over the past thirty years, like all of us, 1 have dealt with failure, loss, humiliation, divorce, and death. I’ve had my life threatened, my money taken away, my privacy invaded, my family disintegrated-and every single day, still got up, mixed concrete, and laid another brick, No matter what you’re going through, there is always another brick sitting right there in front of you, waiting to be laid. The only question is, are you going to get up and lay it?” Also Read – Trending South News Today: Allu Arjun-Rashmika Mandanna starrer Pushpa – The Rule climax locked; Vijay Deverakonda-Kiara Advani to share screen space and more 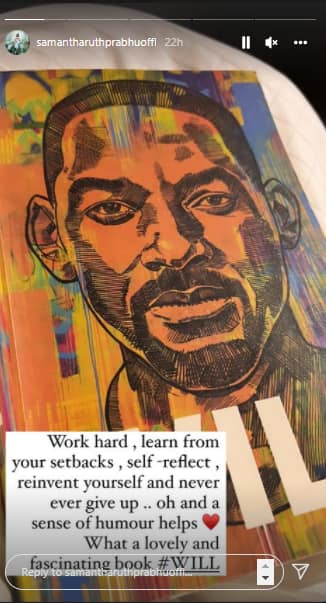 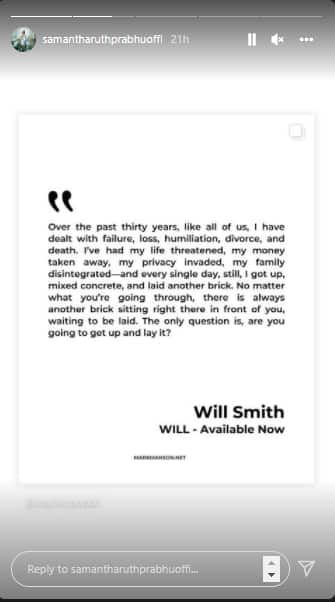 Also Read – Rashmika Mandanna gets goofy, shows how she minds her own business and stays happy – watch

There was immense speculation about the divorce but that news diminished as her song from Allu Arjun’s Pushpa came out. People are in love with the song, Oo Antava. Sharing the cover of the book of Will Smith, she put up a note, “Work hard, learn from your setbacks, self-reflect, reinvent yourself and never ever give up. Oh, and a sense of humour helps. What a lovely and fascinating book, Will.” In the 1990s, Will Smith married and divorced Sheree Zampino. After some years, he married Jada Pinkett Smith. They have been married since then. Also Read – Vijay Deverakonda and Kiara Advani to come together for Shiva Nirvana’s film?

The first look poster of Samantha Ruth Prabhu’s upcoming movie Shaakuntalam was out two days back. It is being directed by Gunasekhar. The actress plays the role of Shakuntala who is a mythological figure and the mother of Emperor Bharata. She also has three more projects in her kitty.