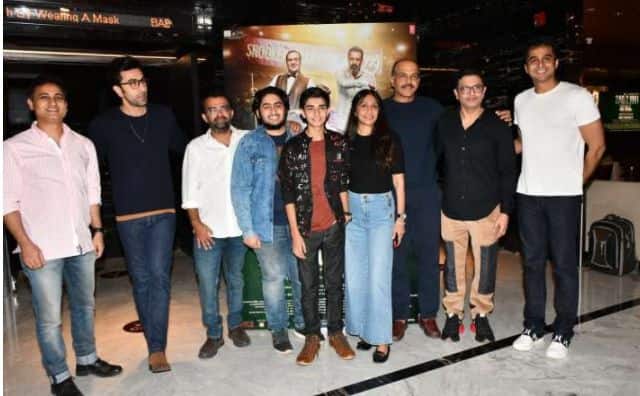 Ranbir Kapoor is not someone who makes frequent appearances to public events. However, he made an exception for the screening of Toolsidas Junior. It was the last film of his late uncle Rajiv Kapoor. Ranbir Kapoor attended the screening with his mom, Neetu Kapoor. He was dressed in denims and full sleeved shirt. When we was leaving the screening, a paparazzi told him, “Sir shaadi pe milte hai,” to which he retorted, “Kiski”. It was hilarious. Trust Ranbir Kapoor to shut down the gossip like a savage king. Fans also noticed how handsome he looked in the video. Ranbir Kapoor has lost a lot of weight and was looking dashing as ever. Others members of the Kapoor family like Armaan Jain, Rima Jain, Aadar Jain, Kunal Kapoor were also present along with film producers Bhushan Kumar, Ashutosh and Sunita Gowariker, and director Mridul. Neela Devi the wife of Shammi Kapoor was also seen. Ranbir Kapoor and Alia Bhatt will be seen next in Brahmastra. Also Read – Alia Bhatt, Janhvi Kapoor and more Top 5 viral pictures of your favourite celebs trending today