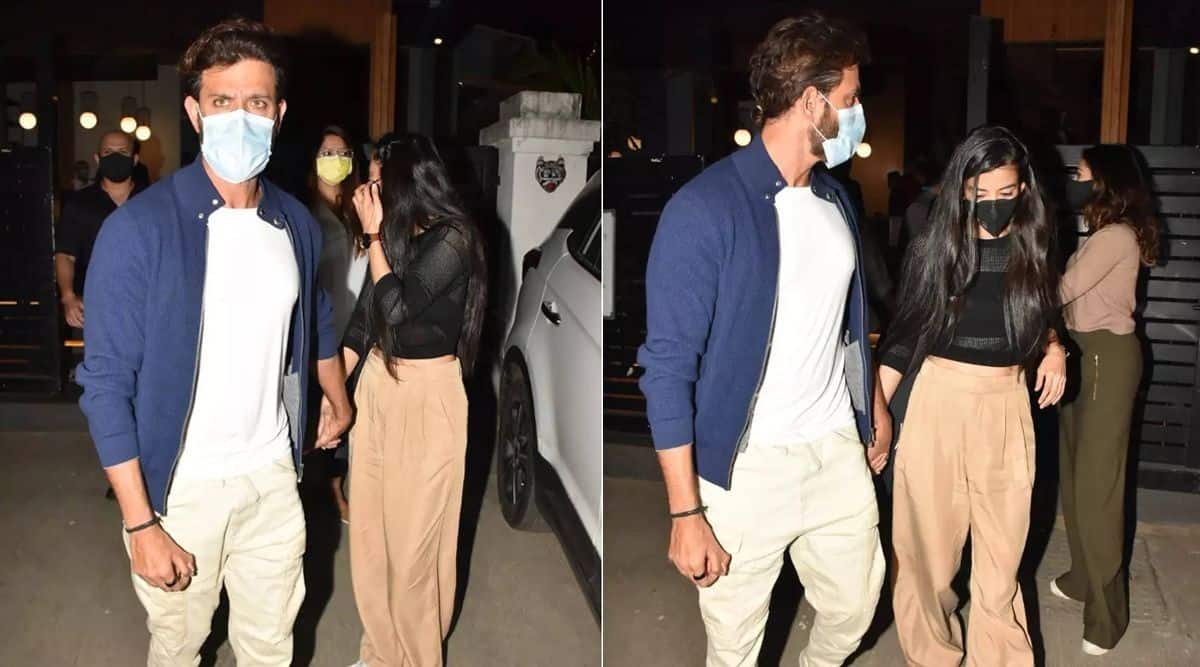 Hrithik Roshan and Mujhse Fraaandship Karoge actress Saba Azad have been hitting headlines for their recent back-to-back outings. They were seen going hand-in-hand, which has made fans wonder if the War actor has moved on in life after his divorce with Sussanne Khan. The two have also remained unfazed by the constant spotting by the paparazzi. They look confident in each other’s company. And while it was being said that Hrithik and Saba met through online dating app, it looks like being on Twitter was enough for them to hit the chord with each other. Also Read – Hrithik Roshan’s rumoured girlfriend Saba Azad joins his family for a lunch date; the superstar’s comment is unmissable

According to a report in BT, Hrithik and Saba have been dating for the past 2-3 months now. It all started when Hrithik had shared a video that he liked on Twitter featuring Saba and a known rapper. He had mentioned the makers of the video since he knew them. Saba thanked Hrithik for his response and that’s how it got them talking through DMs. Also Read – Pathan: Shah Rukh Khan, Deepika Padukone, John Abraham starrer to not release on Diwali? Here’s why [EXCLUSIVE]

“Unlike so many, they aren’t hiding it and it’s admirable, the mutual respect. Everyone has a right to be happy. People are judging Saba and envying for ‘getting lucky’. She bagging the Greek God stories, he winning over a younger girl gossip but they should know that they both are well thinking adults. She is a talented singer and actor herself and both get along extremely well as people. She has a great personality, is witty and smart, is childlike at heart and they both have a philosophical bent of mind and approach towards life. Perhaps this is what binds them,” a source was quoted as saying by the daily. Saba was previously in a relationship with Naseeruddin Shah’s son Imaad Shah for 2 years. Also Read – Saba Azad poses with Hrithik Roshan and his whole family after Sunday special lunch; netizens spark dating rumours again – view pic

Meanwhile, Hrithik was joined by his rumoured girlfriend actress Saba Azad for a family lunch. Hrithik’s uncle and music composer Rajesh Roshan took to his Instagram to share a picture of the family. Sharing two pictures, the family frame and a delicious south Indian meal, the composer captioned his post, “Happiness is always around.. especially on a Sunday, specifically at lunch time.”

The photo shows Hrithik sporting a beard in comfy clothes with his mom Pinkie Roshan, his sons Hrehaan and Hridaan, cousin Pashmina, niece Suranika, Rajesh Roshan and other members of the family. The War actor commented under the picture, “Hahaha true that chacha!! And you are the most fun.” Suranika wrote, “Best Sunday, best family, best lunch!” Saba too took to the comments section and wrote, “Bestest Sunday.”

On the work front, Hrithik will next be seen in Vikram Vedha. The film stars Hrithik and Saif Ali Khan in lead roles, with Radhika Apte in a crucial role. Pushkar and Gayatri, the original writers and directors, are donning the director’s hats for the Hindi remake as well. Hrithik also has Fighter with Deepika Padukone.