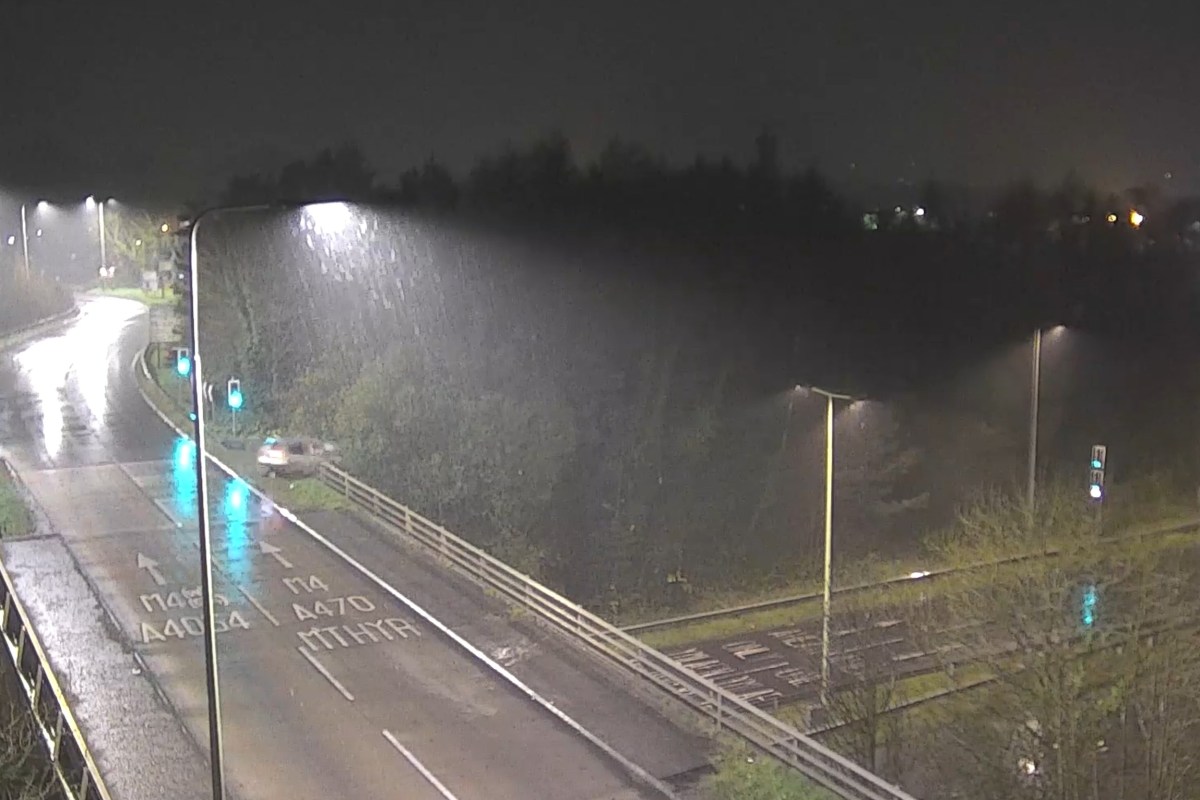 THIS is the horrifying moment a drugged up man killed his girlfriend as he plunged his car 22ft off a bridge after running a red light.

Andrew Vowles, 35, was high on cocaine when he crashed his car in a terrifying early morning smash, leaving mum-of-four Danielle Andrews dead in the wreckage on the Coryton interchange in Cardiff.

He has now been jailed for seven years and six months after pleading guilty to causing death by dangerous driving.

A court heard how heard the couple had been staying at the Park Inn hotel when fellow guests complained about noise coming from their room in November 2020.

Vowles was captured on CCTV when he failed his VW Golf to stop at a red light as he drove at up to 64mph – and then smashed through an overpass barrier before flying through the air.

Prosecutor Rachel Knight told Cardiff Crown Court: “The lights were showing red for 14 seconds as the defendant was travelling towards them using speeds between 62 and 64mph.”

The court heard footage from roadside cameras showed Vowles failing to slow down as he approached the lights, with the car then hitting the kerb before travelling over two lanes of traffic, into the crash barriers and through the air.

Ms Knight said: “He drove in a straight line with no attempt to brake.

“He collided with crash barriers at such speed and force that they were completely demolished.”

The court heard the car was travelling at around 43mph through the air before it crashed into large trees and landed on its roof 75ft ahead.

Danielle, 28, was left “cocooned” in the car wearing a seatbelt while Vowles walked to the hard shoulder of the A470.

The court heard Vowles had nine points on his license at the time of the crash – and was not wearing his seatbelt.

Blood tests revealed he was over five times the legal limit for drugs after being tested positive for cocaine.

The couple checked out of the hotel they were staying in at 3.43am before driving on the roads at “grossly excessive speeds” in heavy rain and, the court heard text messages revealed Vowles had been asking to pick up cocaine from a dealer at 4.01am.

Just five minutes later, the car was then captured on camera on the 40mph slip road before running the red light.

Vowles freed himself from the car and flagged down a lorry driver at 4.30am.

He lied to police and claimed there had been up to four people inside the vehicle at the time of the crash.

In a victim impact statement, Danielle’s family said: “Danielle was a vivacious and intelligent young woman.

“Danielle put her trust in Andrew Vowles when she got into the car with him that night but he betrayed her trust.”

He said: “He knows that he has ruined lives and has taken a life.”

He said: “It can’t be said there is genuine remorse in this case as opposed to self pity.

“This was as clear a case of dangerous driving as can be.”

Vowles, of Caerphilly, South Wales, was also banned from driving for eight years and nine months – and will have to take an extended driving test.

Leighton Mawer of the CPS said: “Andrew Vowles made a decision to drive in the manner he did and bears responsibility for what happened.

“It was his actions that resulted in a young woman having her life taken so tragically.

“Our thoughts remain with Danielle’s family and friends who have suffered a terrible loss.”

If you have been affected by issues raised, Women’s Aid provides a live chat service – available weekdays from 8am-6pm and weekends 10am-6pm. You can also call the freephone 24-hour ­National Domestic Abuse Helpline on 0808 2000 247.