Hrithik Roshan made head turns when he first time made an appearance with Saba Azad for a dinner date and ever since then his dating rumors have been making headlines. 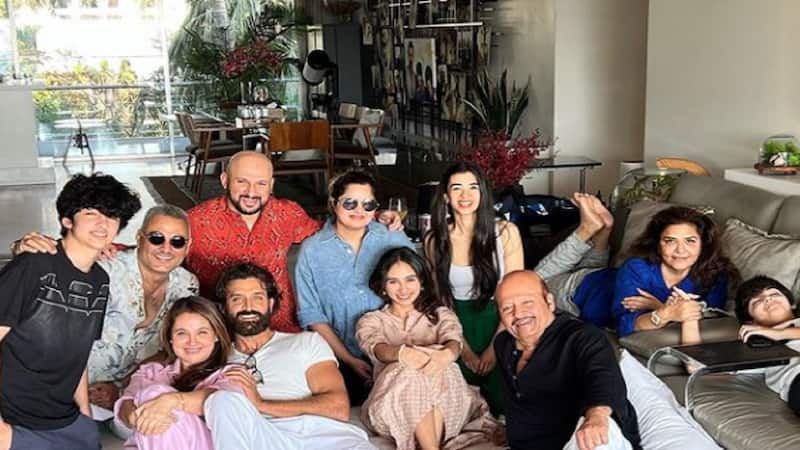 Hrithik Roshan made head turns when he first time made an appearance with Saba Azad for a dinner date and ever since then his dating rumors have been making headlines. And now seems like the actor is all set to make it official. After their first appearance together, Hrithik has been papped by the paparazzi on dinner dates with Saba. And now Sab’s pictures are going VIRAL as she joined the Roshan family for the launch date. Hrithik Roshan’s uncle Rajesh Roshan shared the picture of the family they gathered for a lunch together and that included Saba as well. Rajesh took to his Instagram and shared the pictures with a caption, ” Happiness is always around.. especially on a Sunday, specifically at lunchtime”. It’s a full house. Hrithik Roshan too dropped a comment on the picture that reads, ” Hahaha true that chacha !! And you are the most fun” Saba called it her best Sunday. The family seems to have open-heartedly accepted Sab and can’t wait for the couple to make it official. Also Read – Pathan: Shah Rukh Khan, Deepika Padukone, John Abraham starrer to not release on Diwali? Here’s why [EXCLUSIVE]

Hrithik’s rumored girlfriend Saba seems to be also close to his ex-wife Sussanne Khan, she recently showered praise and called her immensely talented for her music band. After being married for 14 years Hrithik and Sussanne got separated in 2014. However, they are classic examples of being the best parents in the tinsel town and they remained good friends for their town kids Hrihaan and Hridhaan. They often leave us impressed with the way they task e stand for each other. While Hrithik and Saba haven’t yet spoken about their relationship and nothing is officially announced yet. Also, Saba refused to comment anything when asked about her first appearance with Hrithik and her dating rumors with him. Also Read – Saba Azad poses with Hrithik Roshan and his whole family after Sunday special lunch; netizens spark dating rumours again – view pic