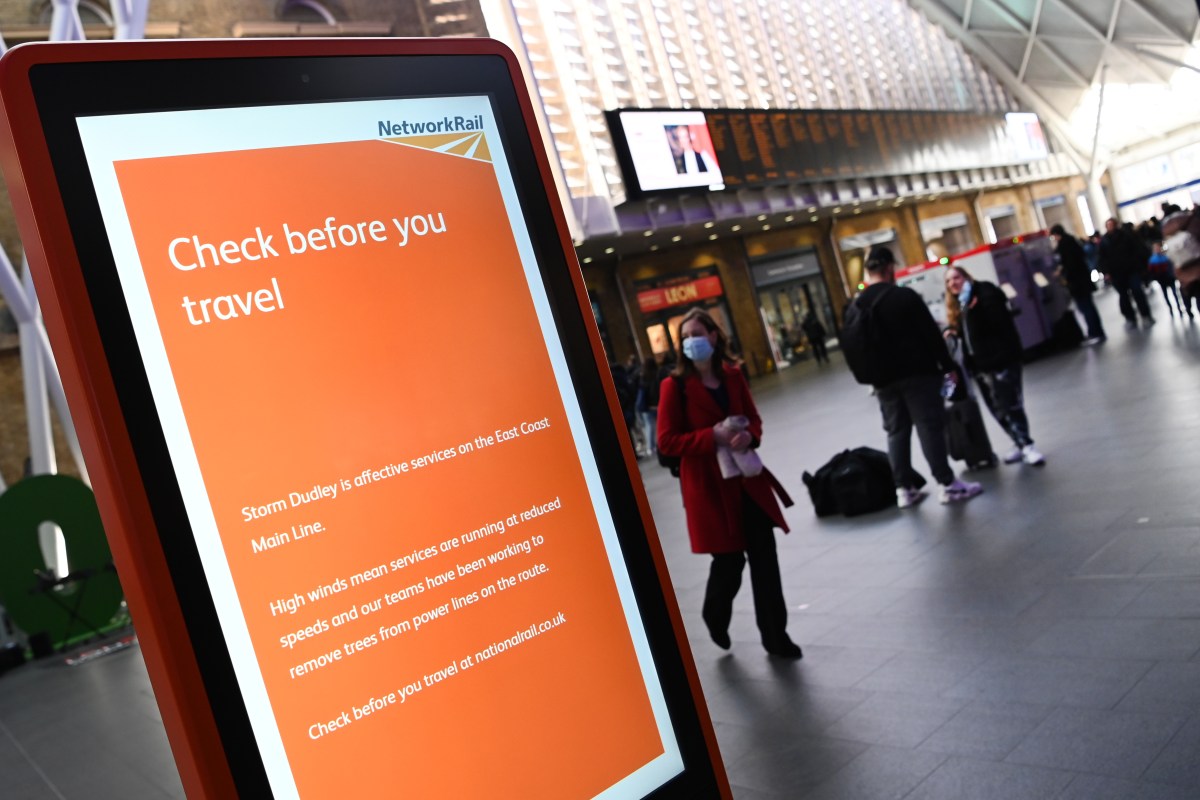 STORM EUNICE has led to schools being shut and Brits have been warned NOT to travel tomorrow.

With 100mph gale-force winds and heavy snow blizzards, the weather warning was raised to a red “danger to life” alert as as result of the destruction brought on by Storm Dudley last night

Contents hide
1 Will Storm Eunice affect flights and trains?
2 Has there been any flight or train cancellations?
3 What have forecasters said about Storm Eunice?

Pilots and airports can judge take-off direction based on where the wind is coming from meaning it is not clear-cut how flights will fare.

As there are more factors to consider when landing a flight could be cancelled based on foreseen wind-related landing risks.

It is crucial to note that individual airlines and airports set their own restrictions on wind speed limits.

Has there been any flight or train cancellations?

ALL rail services in Wales have been suspended after the Met Office issued a red warning for the South West.

Airports are warning travellers to allow plenty of time for their flights and to expect possible delays and disruptions.

Gatwick Airport tweeted: “Weather Warning. Be advised that due to storm Eunice, there is the possibility for disruption to flights, and the shuttle service to North terminal tomorrow, between approximately 10am and 4pm.

“Please arrive earlier if you are flying from Gatwick.”

London Luton Airport announced they have planned to “operate as normal” but were monitoring the storm.w

Heathrow Airport has said while “high winds and poor weather can cause last-minute delays” they are hoping to minimise any disruption.

The Civil Aviation Authority (CAA) has provided advice on what passengers should do in the event their flights are disrupted.

They shared: “If you are delayed, your airline has a duty of care for you, potentially including the provision of food and drinks, as well as accommodation if you are delayed overnight.”

What have forecasters said about Storm Eunice?

The Met Office has issued a rare red weather warning and urges people in Wales and the South West to stay at home.

Schools in Cardiff, Swansea, most of the South Wales valleys and Bristol have closed and will move to remote learning until further notice.

Falling trees, debris, and large waves are said to be risks Storm Eunice may present to those outdoors when the strong winds hit.

Drivers have been urged to avoid driving and stay at home after meteorologists have given the highest weather alert possible.

The ‘danger to life’ red weather warning covers the coastline of Devon and Cornwall.

This also includes the south coast of Wales and will come into effect from 7am on Friday and will essentially cut the country off temporarily.

Forecasters have told Brits to be wary of flying debris and damage to buildings and homes – as roofs tiles and power lines are expected to be blown down by the 100mph winds.