Sanjay Leela Bhansali directorial Gangubai Kathiawadi stars Alia Bhatt in lead role. The film has finally hit the theatres today and it is of the most anticipated movies of the year. Gangubai Kathiwadi got everyone intrigued and fans are going gaga over Alia’s performance. Amid this, Alia’s beau Ranbir Kapoor’s mother Neetu Kapoor reviewed the film, and here’s what she had to say about it. Taking to her Instagram handle, Neetu praised Alia’s performance in Sanjay Leela Bhansali directorial film. The veteran actress shared the poster of Gangubai Kathiawadi featuring Alia and wrote, “Watch how @aliaabhatt hits the ball out of the park” with thumbs-up emoticons. Well, Alia’s performance as Gangubai seems to have impressed the actress. Also Read – Gangubai Kathiawadi: Alia Bhatt reacts to Kangana Ranaut’s claims that the film will be a huge FLOP [Watch Video] 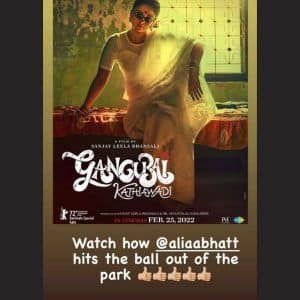