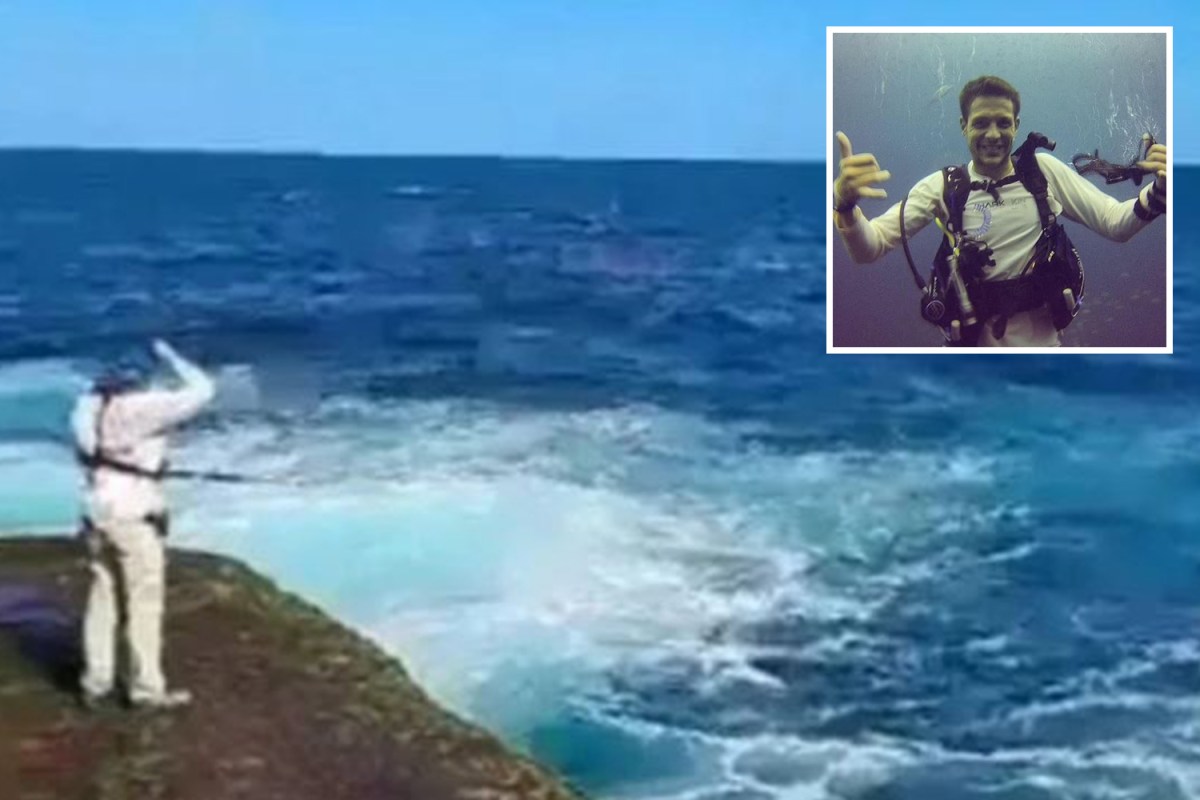 FISHERMEN throwing bait in to the water may have lured the shark to where killed a Brit swimmer, experts have said.

Simon Nellist, 35, was killed in the sea off Sydney by a 15ft great white shark – the first fatal mauling in the area in 59 years.

The former RAF serviceman was just 150m away from the beach at Buchan Point, near Little Bay when the predator struck.

In the wake of tragedy, experts have been giving their reasons for the extremely rare attack.

Buchan Point is known for its game fishing because of the northerly currents and the depth of the water.

Lawrence Chlebeck, of the US-based Humane Society International, suggested fishing could have lured the shark into the bay.

Mr Chlebeck told The Daily Telegraph that “if fishermen were in the area” and then scattering “bait in water increases the risk of attracting a shark”.

Wildlife scientist Dr Vanessa Pirotta also said the shark may have been attracted as a result of the number of fish.

“This animal may have been following prey in the area and simply, unfortunately, came across a swimmer at the time,” she told 9News.

The tragic death is the first deadly shark attack in Sydney since 1963 when Marcia Hathaway, a well-known local actress, was fatally mauled by a shark in Middle Harbour.

The shark pounced while she was standing in murky water only 20 feet from the shore in the northern arm of Sugarloaf Bay, Sydney Morning Herald reports.

Simon himself called for a ban on shark nets and swam with the huge beasts before his death, in tragic posts.

He spoken out about nets and drum lines, used to keep sharks away from swimmers, saying they indiscriminately killed wildlife.

Drum lines are giant hooks suspended on buoys that are baited with fish and he was killed before more were due to be installed in the area.

“Shark nets and drum lines protect no one and kill all kinds of marine life every year,” wrote Simon on Facebook.

And video posted on a Facebook page for divers in Sydney, shows him swimming beside 10 sharks.

What we know so far….

The footage was as part of his work with Scubathlon, a scuba diving centre owned by his friend Della Ross.

Simon was described as a calm and patient certified instructor who told students to respect the ocean and helped in diving rescue scenarios.

“The news hit us like a truck because he was one of the people who make this earth lighter. He loved the water, he loved diving.”

The British expat’s remains were found in the water on Wednesday afternoon following the horror ordeal.

The tragedy happened as the former RAF serviceman was due to marry “girl of his dreams” Jessie Ho.

A close friend of Simon told The Sun: “Him and Jessie were due to get married last year but that got put off because of Covid.

“It’s just horrendous. We spent most of yesterday just hoping and praying it wasn’t him. It’s still incredibly raw.”

“Simon was amazing. That’s all there is to say really. He was just the best.

“He was the nicest, kindest human. It is a huge loss.”

“In the last couple of years we haven’t been able to see him because of the Covid situation.”

The friend revealed Simon “fell in love” with Australia after going travelling around six years ago, following two years in the RAF.

“He was massively into wildlife and knew exactly what he was doing. He wasn’t daft. It’s just a freak accident.

“I know he did some pretty big tours with the RAF.”

Simon grew up in Penzance but hasn’t been back for a few years, said the friend.

“His family are still here and they haven’t seen him in a few years. It’s too sad.”

Witnesses said they heard the victim yell out for help in desperation as the shark pounced just after 4.30pm on Wednesday

The great white allegedly “attacked vertically” before dragging the man’s body out of the ocean.

The attack comes just three months after another Brit Paul Millachip was attacked and killed off the coast of Western Australia.

The 57-year-old was dragged underwater by a 14ft great white when he was killed in front of his horrified family.

Fisherman Kris Linto told Nine News: “Some guy was swimming and a shark came and attacked him vertically.

CRIED OUT FOR HELP

“We heard a yell and turned around it looked like a car had landed in the water, a big splash then the shark was chomping at the body and there was blood everywhere.

“It was really bad.”

One man described how he was fishing and saw a man wearing a wetsuit swimming across the bay.

He said the swimmer was right in front of him when he was dragged under the water by the shark.

The man told ABC: “He was yelling at first, and then when he went down there were so many splashes. The shark won’t stop.”

The shaken man said the attack lasted for several seconds.

He said: “It was terrible. I am shaking. I keep vomiting. It’s very, very upsetting.

“He just went down for a swim, enjoying the day, but that shark took his life.”

Rescue crews on jet skis and boats frantically hunted for the swimmer before human remains were found in the water and, according to reports, parts of a wetsuit were also recovered.

Shocked witnesses claimed the swimmer was attacked by a 15ft great white.

At the time he was attacked, he was training for the Malabar Magic Ocean Swim – which was due to be held on Sunday but has since been cancelled.

A stretch of beaches have now been shut to the public as the first fatal shark attack in the Sydney area since 1963 sparked panic among locals.

A distressing video of the violent ambush showed the shark thrashing around in the bloodied water just metres from the rocks.

And a fisherman can be heard shouting: “Someone just got eaten by a shark. Oh man! Oh no! That’s insane. That’s a great white shark.

“I just saw a four to five metre great white explode on the surface right here on a swimmer and it was like a car landing in the water.

“F*** man, I heard a scream and the shark was just chomping on his body and the body was in half here just off the rocks.

“It came back and swallowed parts of his body and that was it.”

Local resident James, 27, arrived at the beach shortly before 5.30pm when helicopters were circling above the cliffs, but people were still swimming.

He told the Guardian Australia: “Everyone was looking around, trying to work out what was going on.

“There were still people in the water. I’m never getting in again – no way.”