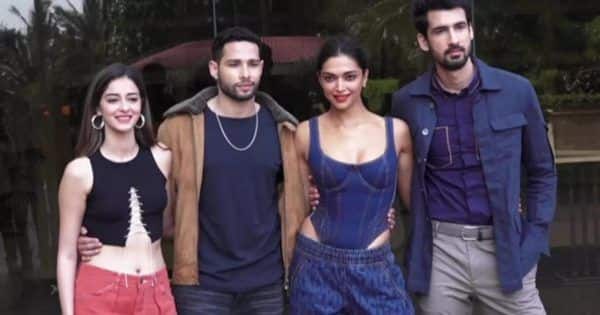 Recently, team Gehraiyaan, including the main cast members, Deepika Padukone, Ananya Panday, Siddhant Chaturvedi and Dhairya Karwa, plus Director Shakun Batra were interviewed by Cyrus Broacha for his YouTube channel, Cyrus Says. During the interaction, Deepika Padukone revealed something very strange about Ananya Panday when she opened up about how the latter refused to allow her and the rest of the troupe of Gehraiyaan to visit her home. When host Cyrush Broacha asked the latter the reason, she candidly said that it’s becasue her father, fellow actor Chunky Panday is always romaing around the house in nothing but a towel, after which she asked the others to visit if they really wish to see Chunky like that. Also Read – Gehraiyaan: Siddhant Chaturvedi on whether Deepika Padukone and him should have taken Ranveer Singh’s permission for intimate scenes

In its review, BollywoodLife gave the movie 3 stars out of 5 and wrote: “Gehraiyaan is brilliantly shot by Kaushal Shah, extremely well acted, written with depth and conviction, and directed with confidence and insight by Shakun Batra. Deepika Padukone delivers arguably the best performance of her career, Ananya Panday is good in a role that’s tailor-made for her and Siddhant Chaturvedi excels in what’s the most ambiguous character of the film. They’re well supported by Dhairya Karwa, Rajat Kapoor and Naseeruddin Shah. Most importantly, Director Shakun Batra and his co-writers, Ayesha Devitre, Sumit Roy, Yash Sahai, handle a complex narrative with extreme maturity, never once letting our attention slip despite a runtime just a touch over 2 hours and 20 minutes. And, after eons, comes a Bollywood movies, where the entire soundtrack is memorable, but then again, is it surprising that a Karan Johar production boasts good music.” Also Read – Trending OTT News Today: Vijay Deverakonda-Ananya Panday’s Liger digital rights sold at a staggering price, Vikas Gupta-Priyank Sharma in Kangana Ranaut’s Lock Upp and more

Listing out the negatives, we added, “The crux of anything story on indiscretion needs to be the motivation and when it comes to Alisha, her reasons are totally justified. However, there seems to be no strong push to shove Zain into her arms away from Tia, which makes it a clear case of attraction in his case, which in turn makes it undeniable that the makers have somewhat glorified cheating in a relationship, more so with how seem pretty insensitive to Tia. And then, as if Shakun and his writers certainly realise this, they try to make amends in a knee-jerk way, painting Zain as an out-an-out bad guy with no scope for redemption, taking inexplicably horrific decisions, thus abandoning their own matured treatment for a while. If not for these portions, Gehraiyaan would’ve been even better.” Also Read – Trending Entertainment News Today: Akshay Kumar BRUTALLY trolled for copying viral meme in Bachchhan Paandey; Alia Bhatt’s Gangubai Kathiawadi 1st REVIEW out and more

Genraiyaan is produced by Karan Johar’s Dharma Productions and is currently streaming on Amazon Prime.